Sutjeska National Park, Alps of Herzegovina – The nature you have to experience 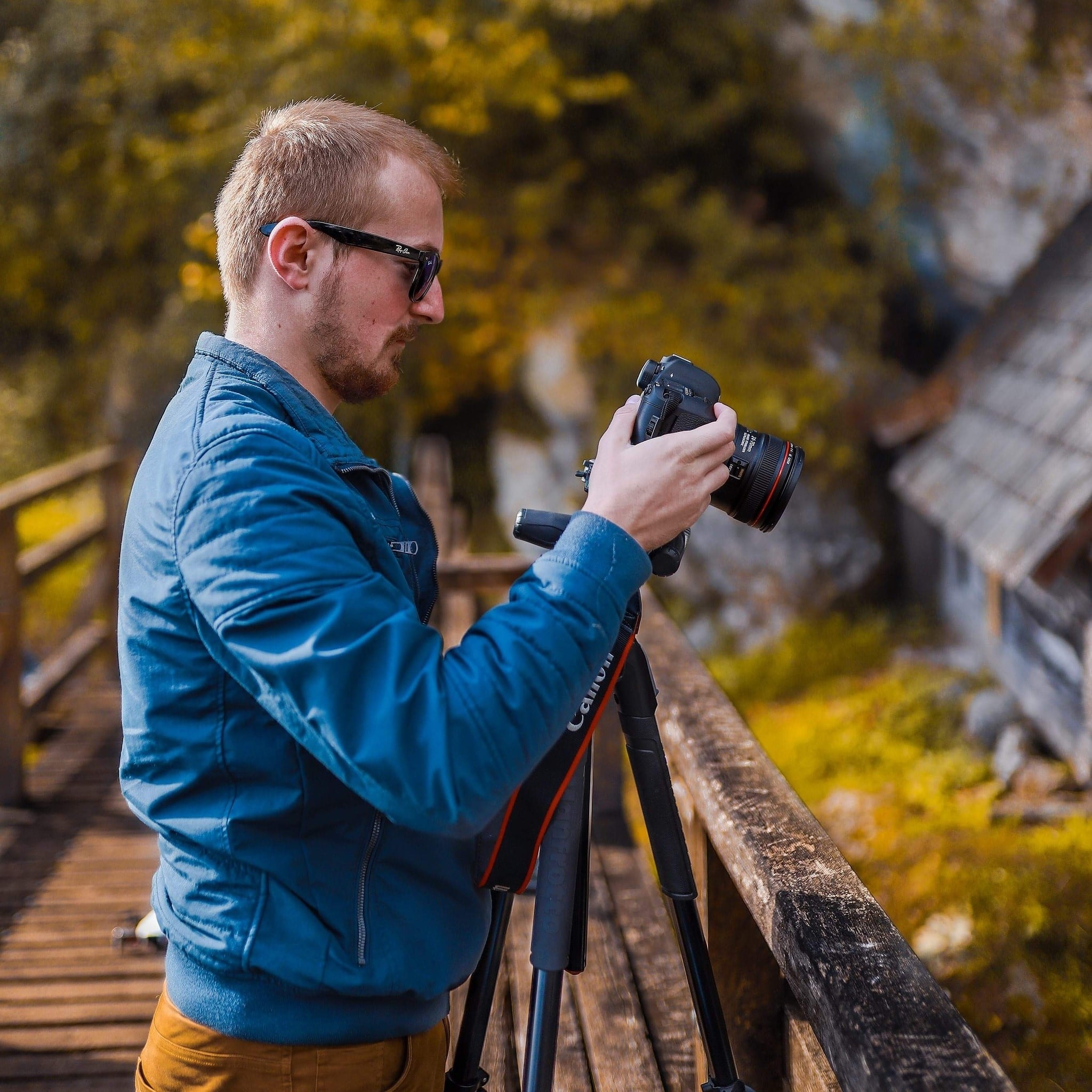 A great lover of nature and travel, a promoter of domestic tourist potentials. Thanks to my work, I became a brand ambassador and concluded cooperation with the world and domestic well-known brands. I won various awards on world-renowned photo platforms and I have a significant number of followers who support my work on social media. Let's promote our country together.

Sutjeska National Park, Alps of Herzegovina - The nature you have to experience

As a teenager, I had a great desire to visit the oldest and largest national park in Bosnia and Herzegovina, Sutjeska. You must be wondering why, the reason is the uniqueness of this place, this national park is a completely different dimension of our country. From mountain peaks that stretch for miles, the largest rainforest in Europe to rivers, waterfalls, and surreal plateaus whose green color rests the eyes of every observer.

You can always find all the information about the park on the internet, I won't talk about it. I will talk about my experience, to best present to you what the most beautiful national park in the country looks like in the eyes of a nature lover.

Why is this national park so special? Why does it arouse a dose of adrenaline and respect in every visitor? I will try to give an approximate answer to these questions because until you felt it, it is difficult for anyone to give you an answer that will match your feelings when you get there.

Everyone has heard of Maglić, the highest mountain in Bosnia and Herzegovina, but few talk about a plateau at the foot of Maglić, about Prijevor. Prijevor left the biggest impression on me in the whole park, it is a plateau surrounded by mountain massifs, that feeling when you step on a meadow and when you turn in a circle and see those unreal beauties around you, you ask yourself, wait, where am I? This is what I dreamed of, these are your magical Alps, and then after a few moments, you realize that you are in Bosnia and Herzegovina and there is no end to your happiness. 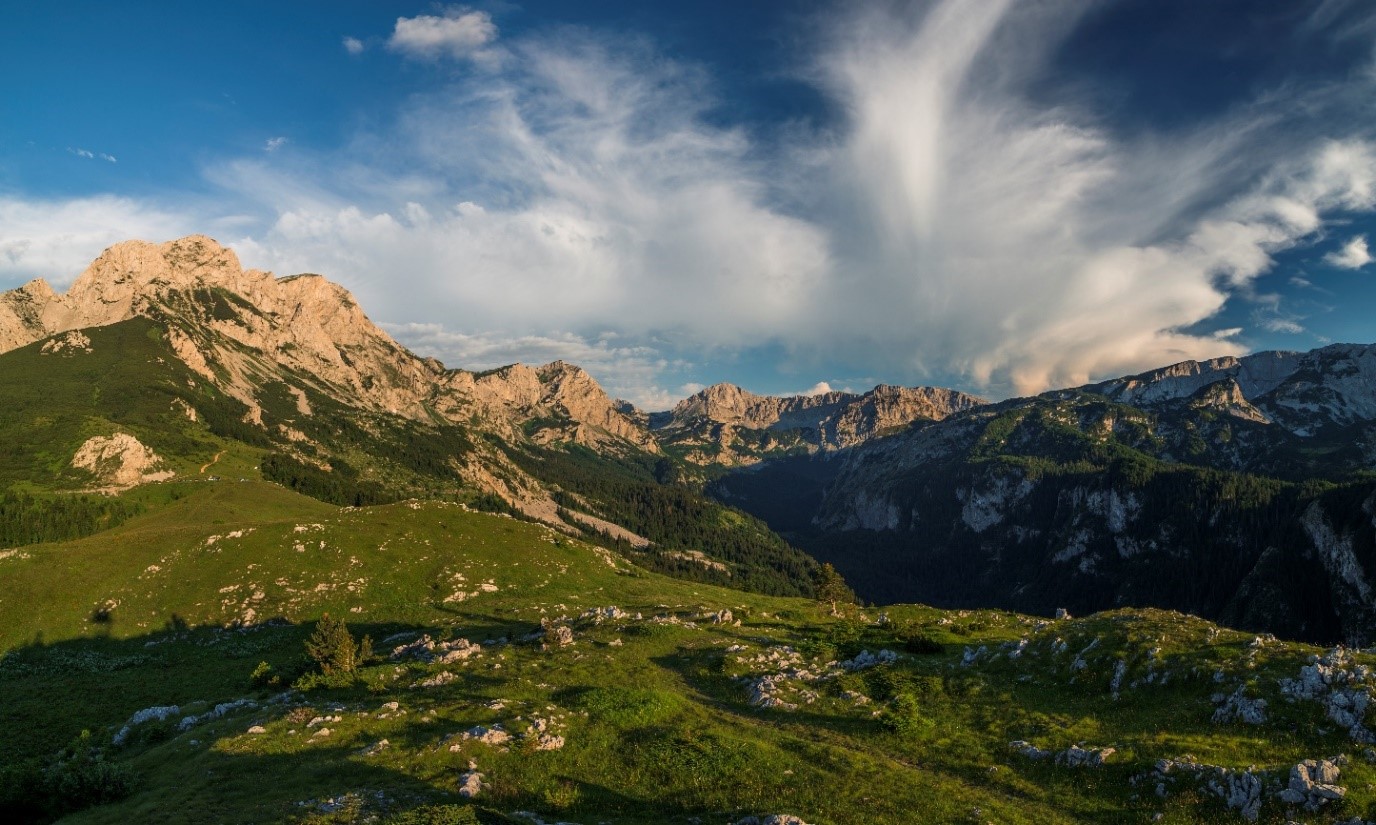 For the first time in my life, I was camping, hey, sleeping in a tent at 1700 meters above sea level, under the open sky and surrounded by strange but phenomenal sounds of pure nature. It’s one of my favorite experiences in life because I’ve never seen so many stars in the sky before, I’ve never felt a greater presence of wilderness around me. It is special, it is what fills the heart of everyone who truly loves and respects nature. It is also interesting that on the plateau there is a very strong source of drinking water. Imagine, at 1700m above sea level you have a great spring that you can use for refreshment. You can even make yourself a tea or a coffee in the morning when you wake up in the tent, so that way you can stick to your routine.

You know that feeling when you lie down on the grass, stretch out and with the naked eye you can recognize any constellation, you can see the unreal Milky Way shining across the sky and the millions of stars twinkling like scrolls on a warm summer night. This is why camping under the country’s highest peak should be high on your bucket list. To see how that looks like, take a look at the photo below. 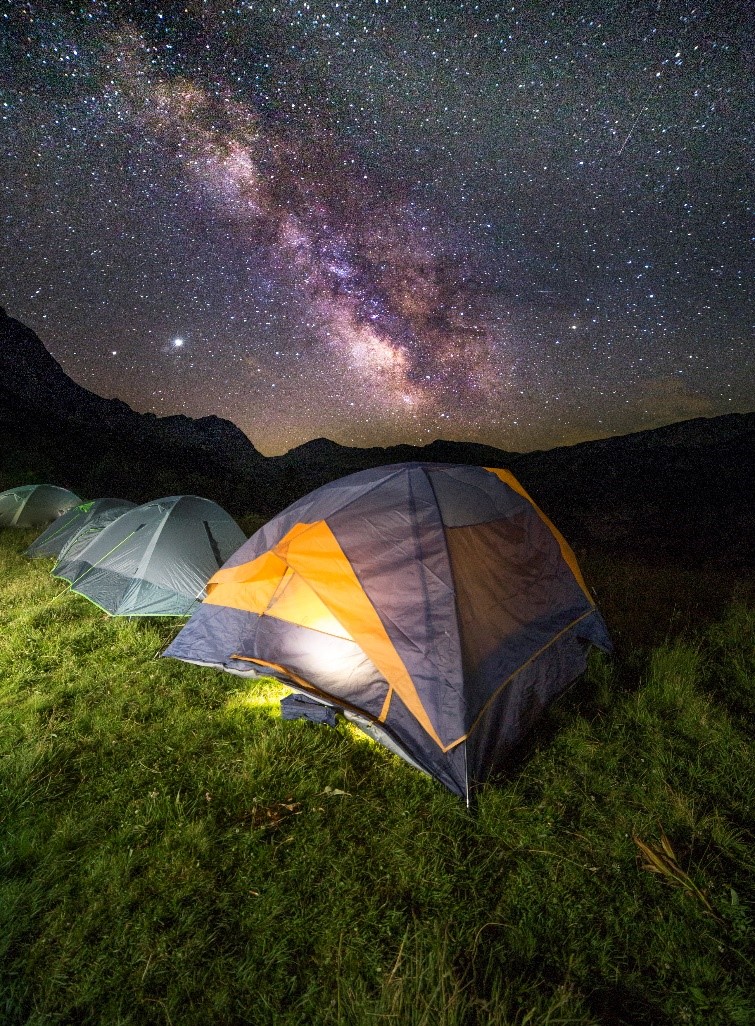 Camping on Prijevor and the Milky Way

This time I did not climb Maglić, but I visited one of the largest and oldest rainforests in Europe, Perućica. In the heart of Perućica, there is a waterfall Skakavac over 70m high as well as rich flora and fauna.

What’s special about Perućica is that no human ever changed the appearance of the forest with its influence, in some moments you imagine that you are in some tropical areas, especially when you approach a waterfall, the humidity is high and that feeling is fantastic. Perućica is a must-see location in the Sutjeska National Park, it is unique, somehow different from other forests, and I have been to different areas and I have never experienced such diversity in one place. This rainforest is of great importance, even world biologists have come and admired its diversity, it is a great gem of this country. We hope that people will never affect life in the rainforest because it is about 20,000 years old and there are trees whose rings are said to be up to 300 years old.

What I will tell you is that the Skakavac waterfall looks phenomenal, like some South American waterfalls. You somehow have a feeling that you are somewhere in the heart of the Amazon and in reality, you are in Bosnia and Herzegovina. Isn't that fantastic? A very pleasant wind blows near Sakakavac, which feels like a supernatural climate in the hot summer days, and the water which hits the rocks and creates the rain further enhances the experience and you completely indulge in the charms of nature. 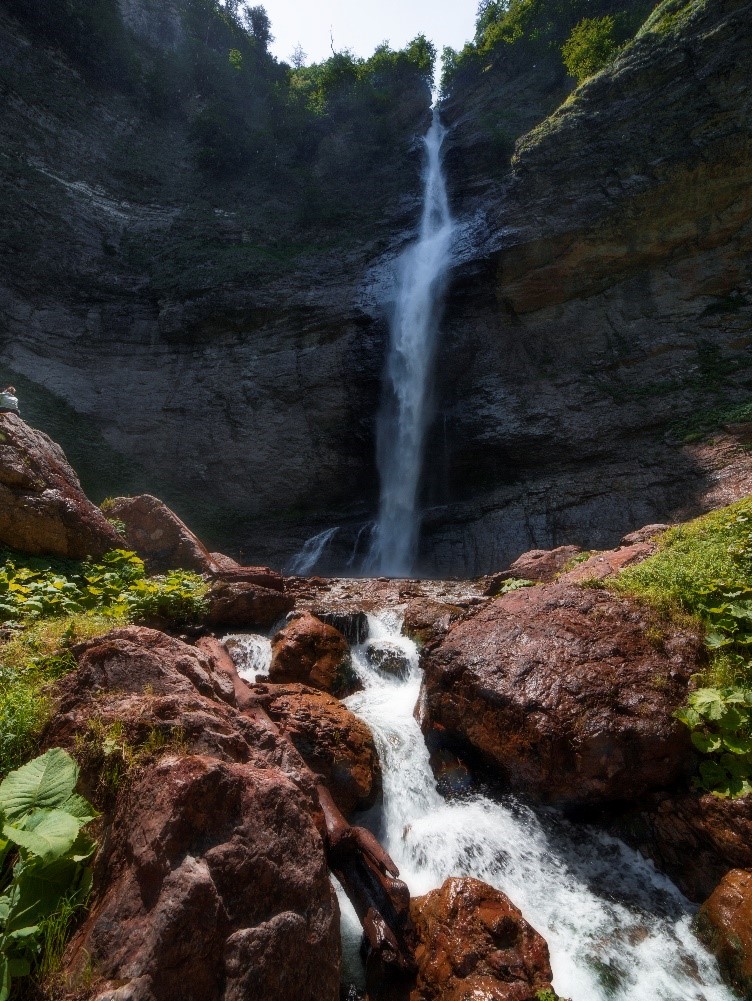 Sutjeska National Park is so diverse, there are several mountains in the park itself, namely Zelengora, Maglić, Volujak and Vučevo. Each of them tells a different story, each one is special in its way. For example, Zelengora, rightly bears that name, because the grass looks unrealistically green and soothing. Zelengora is considered to be the most beautiful mountain in the park, at least that is what most people who have visited the national park say. I can tell you that they are not wrong, although I the weather was very bad when I visited. It was foggy, rainy and cold, but Zelengora left a huge impression on me.

That enchanting greenery, its accessibility and its beautiful lakes are something perfect. Zelengora is a very easy mountain, there are not too many ascents, there are no difficult trails, it is very tame. If you are lucky, you may come across a bear, chamois or some of the wild animals, which, as the locals say, are very numerous. I was unlucky this time, but I am returning there intending to see how these wonderful creatures enjoy the wilderness of that green mountain.

As I said, Zelengora has several lakes, known as the "mountain eyes". The lakes are Gornje and Donje Bare, Orlovačko, Kotlaničko, Štirinsko, Borilovačko, Crno, and Bijelo lakes. Impressive isn't it? There are also a lot of shepherd's huts spread across the entire mountain because, during the summer, shepherds lead their sheep to the pasture on the plateau, which is very rich in high-quality grass and plants. This is where high-quality cheese and milk come from. 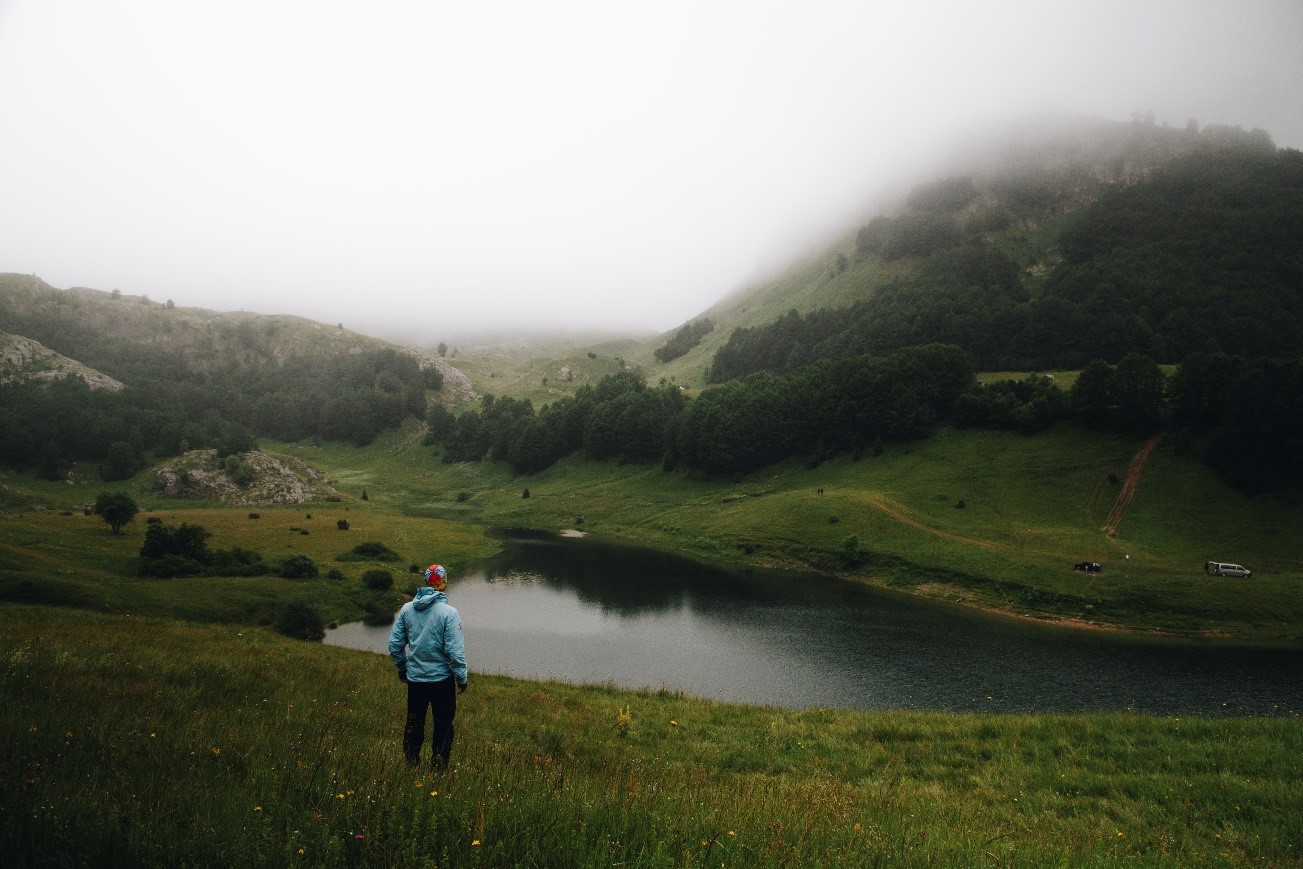 What you have to visit is the famous monument on Tjentište, which stands in memory of the fighters who lost their lives in the battle for Sutjeska. They say that it is the heart of the national park and it is worth visiting because it has cultural and historical significance. Known as the "Valley of Heroes", the monument was erected on that site in 1974.

Tjentište is located some 25 kilometres from Foča and the monument is located near the road and it is very accessible. A large number of tourists visit this place every year. Did you know that world-famous stars from all over the world made music videos here?

Annually, the "Valley of Heroes" is visited by over 30,000 people, and within this complex, there is a museum about the battle of Sutjeska and a memorial house where you can find frescoes that mark significant events from the war.

The monument consists of two concrete wings, separated structures, 19 meters high, which fit fantastically into the natural landscape. Between the wings is a space shaped by fighters and columns in motion. It seems very interesting to you, I warmly recommend you to visit Tjentište. 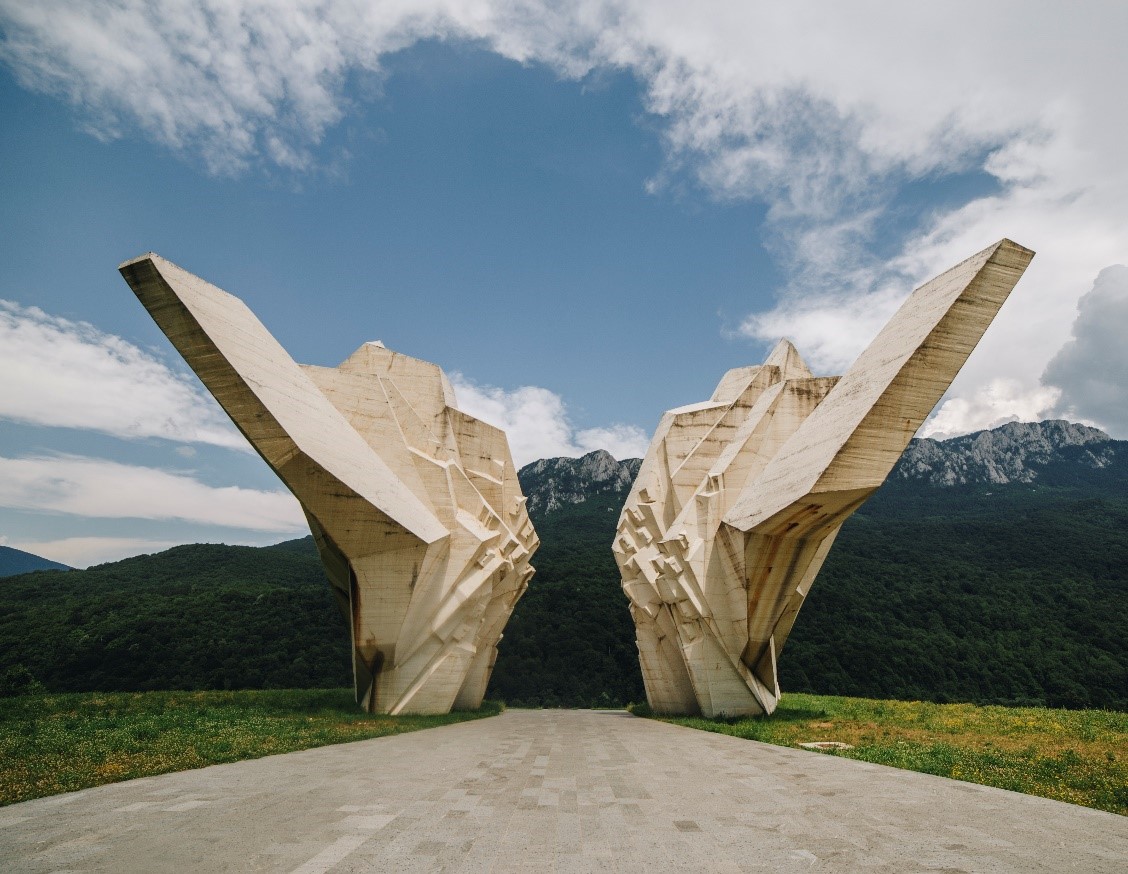 Once you come to this oasis of beauty you will have a desire to come back many, many more times. Bosnia and Herzegovina is a territorially small country, but very rich in natural beauty. What I just told and described you is just a small part of what you can see in the Sutjeska National Park. I will talk about some places I want to visit in the future encounters with the park, and these are all the lakes of Zelengora, last time I only visited the Orlovačko Lake. Besides Zelengora, I want to explore Volujak, Vučevo, and try a new dose of adrenaline – canyoning on the river Hrčavka, which is said to be perfect for this activity.

There are so many things you can do while you are in the park. I believe you already know that the regionally popular OK Fest is held in Tjentište, which gathers thousands of people during the few days of the festival. You can use the time and go on unforgettable rafting on the river Tara, even though the rafting is not a part of the park, it is relatively close. River Tara is considered one of the best rivers for rafting, I have tried it, it is phenomenal!

Yes, I almost forgot, the entrance to the Sutjeska National Park is charged a symbolic 5KM (2.5 euros), which is a very affordable price for every visitor. Preserve nature, love, and respect it 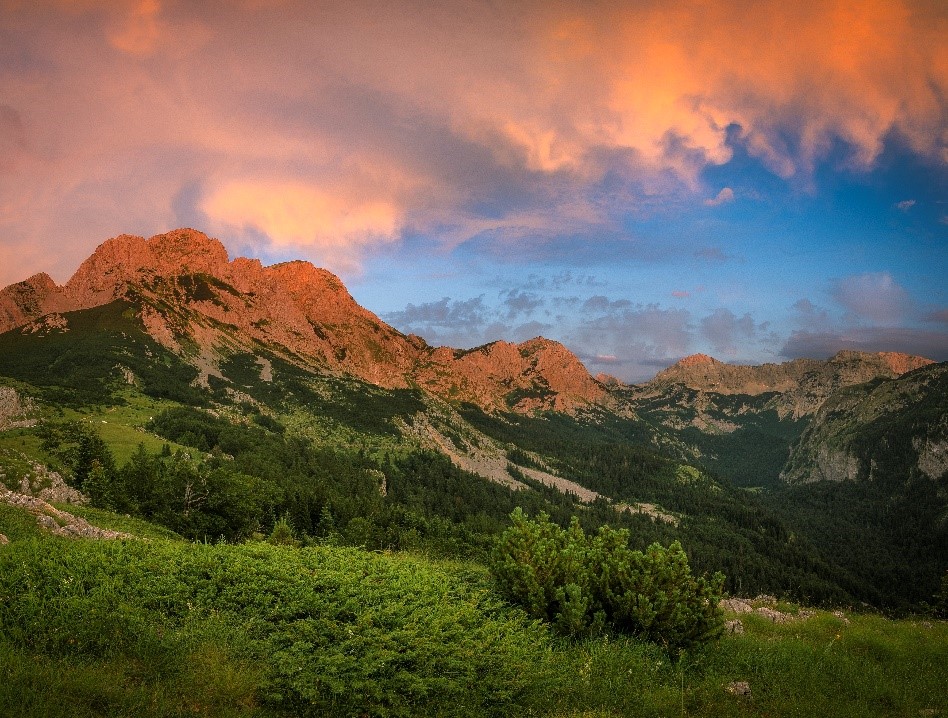